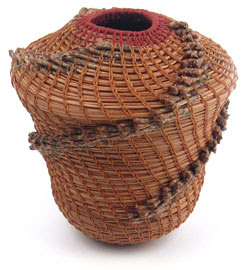 
This is one of the latest pine needle baskets I have made. Well actually, I have only made about a half dozen over the years. I have never really taken a class in it, just someone showed me how to get started and I have been winging it ever since. I learned how to coil without the aid of a gauge, so I have never been able to get the hang of using one. I started this basket telling myself that I would make the whole thing using a gauge, but as you can tell I only got an inch or so before I became too frustrated and went back to my old way of adding my new needles in groups with the end caps showing.

It is hard to tell in this photo, but the opening is actually triangular in shape. I would like to say that I planned that, but it was in fact a happy accident. As I added the needles in three spirals the difference in bulk of the coil caused the opening to deform into a triangular shape. I used the red waxed linen around the lip to accent the contrasting shape.

The pine needles I used for this basket were collected in Oriental, North Carolina. I used to go there to visit my friend and fellow basket weaver Becky to take classes she hosted with nationally renown teachers, such as, Martha Wetherbee, JoAnn Kelly Catsos and Eric Taylor. I was so excited when I first discovered that they had the long leaf pine needles literally laying all over the ground there. Fortunately I discovered a great tree in an open field across from the marina where I would stay. I am sure the neighbors thought I was completely insane watching me carefully pick through pine needles, discarding ones that I deemed inferior. Since they really only used them as mulch I am sure they thought I must be extremely anal retentive if I was that choosy over what needles went around my flowers. Also, the classes were often in the summer and I would gather my needles in the evening after class was over. Oriental is on the coast of North Carolina and they tend to get a lot, I mean A LOT, of mosquitoes. As I would be out crawling around in the grass I would get swarmed and since both hands were occupied with precious long leaf pine needles I would end up using the bundles as a make-shift fly swatter. As I said, I am sure the neighbors already thought I was nuts and the image of me apparently beating myself with pine needles didn't help I am sure.

But in the end I got my pine needles, actually I have a whole Rubbermaid sweater box full of them, and a nice basket out of the adventure. I am working on another basket right now, but it is going very slowly. I need to get back to working on it, but as I am sure you are well aware, stuff just gets in the way of fun.
Posted by J. Anthony Stubblefield at 8:51 AM 6 comments:

For one of my classes in college I cataloged my Mom and Dad's entire collection, including photos, measurements and any information I had on the basket such as materials, origin and maker. Unfortunately this was all done back in the stone age, e.g. before the days of computers, so all I have are some black and white negatives and a photocopy of the book (the professor insisted on keeping the original). Also many of those baskets they don't even have any more and they have added many many new ones since then.

The thought of redoing the project just makes me tired though. I have some of my personal collection cataloged and they are on my website, but most of the information I have is on the baskets that I have made myself. I have so many Native American baskets that I simply don't know anything about. I should photograph them and add them to my website in the hope that someone will know something about them.

I have an iPhoto book in process of the Shaker baskets I have made and need to get it finished up and printed. Unfortunately it is on a friends MacBook since I have a very old version of iPhoto on my computer. This makes it very hard to work on, but it is one of the things on my very long "to-do" list.

One of these days...
Posted by J. Anthony Stubblefield at 5:18 PM No comments:

Email ThisBlogThis!Share to TwitterShare to FacebookShare to Pinterest
Labels: Collection

(click to enlarge)
Whenever I think I have too many baskets or that my house is being over run, I just have to visit my parents and it puts everything into perspective. My parents have been collection antiques since before they were married. My great grandmother was an antique dealer (I have some pieces from her) and my father grew up with the bug. Before I ever even got into basket weaving we always had a few around the house. You can see one of those baskets in the photo, it is the large round baskets on the third beam from the front and the fourth over from the left. Anyway, once I got interested in basketry back in 1984 when I was still in college, the collection started. The baskets in this photo only represent part of what is even in the room, there are probably about 100 baskets alone just in this one space. There are just as many scattered throughout the rest of the house as well.

It is very inspirational just being in the space. I used to weave many of my first baskets right underneath all of the ones in the photo. I used many of these basket as models that I tried to duplicate as best I could with the materials I had (e.g. reed). I learn so much from studying these old baskets. While I learned from a few basic classes I used that knowledge to explore many different styles and different shapes. I always challenge my students to do the same thing. Why limit yourself to just the one basket you learned in class or have the pattern for when the whole world of basketry is out there for you to try. You already know more than you think. I can guarantee you that 90% of the baskets in this photo you already know how to weave, you just need to put together the pieces you know in different combinations.

Now just to make you feel bad, my mom and dad take those baskets down at least every 2 or 3 months and dust/vacuum each one. Remember this is only a portion of their collection. I just tell people that come to my house if they look at a basket they have to promise to put it back in the same spot otherwise you will see the dust ring!
Posted by J. Anthony Stubblefield at 8:29 PM 2 comments: