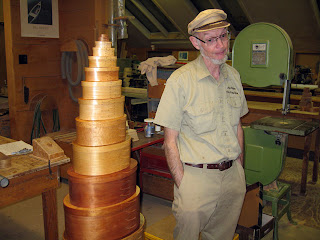 Originally I was supposed to be on the fifth day of a workshop with Marilyn Moore at the John C. Campbell Folk School, but unfortunately the class was canceled due to low enrollment. Needless to say I was very disappointed as this was going to be something really outside of my comfort zone and I was looking forward to the challenge.

Well I decided since I already had the week of vacation approved I would go ahead and take it off and just get all the stuff, that didn't get done during the holidays, accomplished. (So far I am not getting much checked off my to-do list, but I still have a couple more days!) Initially I had tried to find and alternative class or workshop to take, but in January those are far and few between, plus I didn't have a lot of time to look with the holidays right around the corner.

I have always wanted to take a Shaker box making class with John Wilson at his home workshop in Michigan, but every time there has been a conflict with one of the four or so classes he teaches there a year. In one evening and a day you make a set of five cherry oval boxes. I thought I would give it a shot, but he didn't have his 2011 schedule up on his website yet. I thought about calling, but one thing lead to another and I never got it done.

Flash forward to the Thursday night before my week of vacation was to begin. I was getting home late from a video and photo shoot for a commercial and print ad and stopped to collect the mail. Amongst the couple of bills and grocery store sales was a envelope from John Wilson. I knew it would be a new catalog and updated class schedule. As I looked flipped to the schedule, what was the first date and class to appear? A beginner Shaker box making class starting on Friday at 6pm. YES, 6pm the next day, in Michigan! I had looked up the route to his shop before and knew it was easily a days drive. I did some quick map search on the internet and determined that it would be possible to make the class the next day if I left early in the morning. The problem was that I had to work the next day, plus I didn't even know if there was space in the class.

By this point it is 7:30  and my mind is racing. I form enough coherent thoughts to realize the first course of action was to determine if I could even get into the class before I figured out how I could take off work. So, I called John's workshop just on the off chance that someone might be there. Well a young boy answered the phone much to my surprise, I asked for John and after some yelling of, "Mom, some guy wants to talk to dad," I was informed that John was asleep. I got off the phone saying I would call back in the morning. Well I figured I might as well go to the next step and call my boss at home to see if I could take off. I was going to offer the option of coming in on Monday of my week off to finish up the stuff I was supposed to do the next day. My boss didn't answer so I had to leave a message.

About an hour later my boss called me back and had no idea what I was talking about as I am sure my message was a crazed jumble of information. The great boss that she is she agreed to let me have the day off if I would come in on Monday, but she also cautioned me to check the weather. Duh, I knew that we were maybe supposed to get a dusting here in St. Louis, but didn't really know what was happening in Michigan. We decided that since I couldn't even find out if I could get into the class until in the morning that I would either be at work in the morning or I would call from the road that I was on my way.

I ran around, laid out clothes and brought up my suitcase from the basement. I also checked weather.com and got mixed messages about bad weather around Lake Michigan and Charlotte, MI where the class was going to be held. I decided to pack warm clothes and good boots and outerwear and that I would simply ask John what the weather was like. I also did a search on hotels and found a cheap Super 8 a couple miles from class. I finally got myself settled enough to go to sleep since I was going to be getting up at the crack of dawn.

My normal routine is for the alarm to go off at 4:30 to go to the gym. I did my normal routine knowing that I would need to call at the same time as I had to be into work. Fortunately at some point in the morning I realize that Michigan is in the eastern time zone and that instead of having to wait until 8:30 to call I could call at 7:30am St. Louis time. I watched the weather again and it looked like Charlotte would be at the edge of the bad weather. I called John promptly at 7:30 my time and John answered. As luck would happen someone had recently canceled and there was a spot in class and he said that while it was winter in Michigan they were far enough away that they didn't get the lake effect snow. I told him that I was zipping up my suitcase, throwing it into the back of the car and would be driving straight to class.

Well, since this story is getting ridiculously long as it is I will summarize my drive with a few words, such as, engine light, blowing snow, black ice, 0 to 30 mile hour creeping, blue skies, speeding and only stops for gas and the bathroom. After all that craziness I still was the first one to class! Apparently the drive is shorter than MapQuest indicated and my new Garmin GPS I got for Christmas is very accurate in approximating arrival times.

While I was a bit frazzled the first night of class I had a great time and I am very happy with the way my boxes turned out. I just now want to make another set as I feel I was learning on this set and I would like to make another with what I know now.

Here are some photos from my experience.