If you have never gone to the John C. Campbell Folk School then go sign up for a class today! You will not be disappointed. This was my fourth time to the folk school and I am already looking forward to next year. My class was taught by JoAnn and Steve Catsos, black ash masters. JoAnn and Steve make all of their own molds, handles, rims and splints, but this time we got our turn to make our own materials (at least partially) ourselves.

From St. Louis you end up drive along the Ocoee river, which in the warm month is flowing with rapids. The road is a bit winding, but as long as it is light out and not icy it is a fun drive.

I usually choose the dorm room option as it is the most economical and it saves more money to buy things! It is also nice as you get a chance to meet some of the many other like minded crafts people. There are all levels of accommodations at the Folk School, from the rustic (like the dorm room above in the Keith House) to the brand new posh single and double rooms.

These are some of the basic tools we used to process the black ash log into splints for weaving.

Steve gets us started by splitting the log in half with wedges. The log is then halved again into quarters, then split into billets which we then set to work on with the draw knife and the mallets.

Since the log was just cut a week or so before class the sap was still rising so JoAnn and Steve were able to peel the bark off in one big sheet. We were then able to play around and fold it into buckets to be stitched with elm bark. I had never tried anything like that before and it was so cool. I thought it was wild to just be able to bend the bark like it was a big sheet of paper, but the stitching with elm bark was even better. The elm was like working with leather lacing, it was so strong and flexible I couldn't believe it.

After a quick pounding demonstration, which Steve made look much easier than it was, he demonstrated splitting the single growth ring in half to reveal the beautiful satin surface. Here Steve is using a splint chute to help with the splitting.

Here is my billet all ready for me to start pounding, but before I could do that I had to clean up the edges a bit on the shaving horse with a draw knife.

And so the pounding begins and continues and continues. While it did take hundreds of hits it was so rewarding as the rings began to separate and fortunately every layer was that much easier to peel apart.

Here is my pile of splints. They were thick enough I could have easily split them to satin and maybe even a few to double satin, but for the basket I was making I needed extra heavy splints so I left them as they were.

After the splints were scraped to the desirable thickness it was time to cut them into weavers and uprights. Here Steve demonstrates using a bank of knives to cut multiple weavers from a single length of splint.

The grounds of the Folk School are so picturesque. In a small tree right next to the front porch of the cafeteria was a next of baby robins. We checked on them everyday at every meal, you just couldn't help it.

After all the prep work the actual weaving of the basket went pretty quickly. I brought my own mold so made the handle and rims ahead of time. This was a "bump bottom" puzzle mold that I have had for a while, but had never woven on. It is about 10" in diameter and the largest in a nesting set of 4.

Here is the happy class with our completed baskets. Most people were able to finish at least a couple baskets during the week and went home with a nice stash of splint.

One of the cool things they do at the Folk School is to have a show on the last day so can see all the work that has been done in the various classes. These are the three baskets and the bark "bucket" I made. Normally they give you little slips of paper to write your name on, but Steve thought those were too pedestrian so he made us each a brown ash tag in a white ash hold. Now how cute is that?

This is what the inside of my basket looks like. It has a double bottom, kicked up in the middle. You can't see it in the photo, but there is the traditional Bushwhacker "knot" in the bottom.

Here are some of the incredibly intricate turnings that were done in the wood turning class. Yes, those are real sea urchins used to make the Christmas tree ornaments.

These chairs were made in the wood working class in the studio next to ours. The one in the center was the instructor's sample. The students in the class did and incredible job which they should be very proud of.

If this final image doesn't convince you of the splendor of the John C. Campbell Folk School then nothing will. Can you just imagine waking up to that every morning? At least I got to do it for a week.
Posted by J. Anthony Stubblefield at 10:01 PM 3 comments:

Getting Ready for John C. Campbell 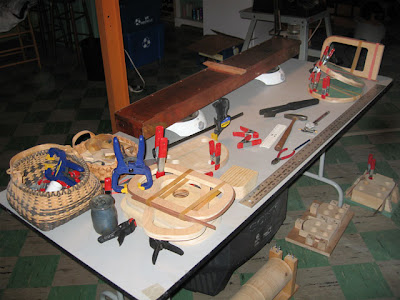 I am getting ready to head down to the John C. Campbell Folk School and another exciting class with JoAnn Kelly Catsos. This time we are going to be processing our own ash splint for our baskets. I have done a little of this, but never enough for an entire basket. I am bringing two of my own molds so am making my own handles and rims. It has been awhile since I bent my own stock so I had to get my bending station set back up in the basement. Once I get everything set up I usually bend a bunch of stuff up, so I am making a few extra sets to have on hand. 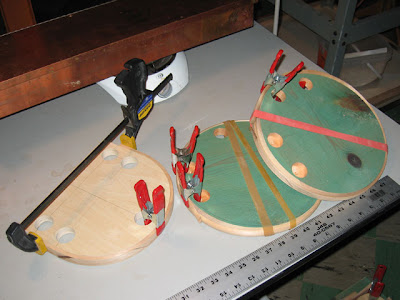 Here are the rims and handles bent around the jigs I especially made for this basket. This is going to be a swing handle so I still need to make the ears.

I will take more photos while I am at the folk school and post those when I get back so you can see how everything turned out. This is the first time I have gone to the Folk School when it wasn't in the middle of winter so I am excited to see the mountains in bloom.

I finished some baskets!

OK, most people assume that I weave all the time. In reality I weave very infrequently, which is unfortunate. When I do weave though I tend to weave a lot, but finding the time is always the challenge. As I am sure you are well aware of, life just gets in the way of your fun.

When I was vending at the State Line Friends Retreat I was a weaving fool. I was demonstrating using my weaving stands so got four basket bodies woven. I also bought a waxed linen and cotton twining kit from Judy Wilson. I have always admired Judy's baskets and kits, but just never got around to picking one from the myriad of designs she has. I used to twine a lot way back when, but haven't in years so was excited to give it a try again. 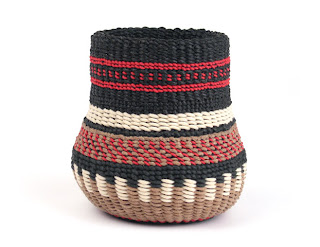 Northwest Coast
I learned a number of things when working on this basket. For starters I twine "backwards" to the way Judy teaches. When I learned back in college from Maxine Kirmeyer (who unfortunately passed away this past September) she had us to twist counter clockwise or the way you would turn a screw to tighten it. I realized I wasn't twining the way Judy did when my spirals were going in the opposite direction. But, it didn't really matter all that much other than I probably wasn't ending the way she would have liked for me to. The other thing I learned is that I twine VERY TIGHTLY! My basket is about 2/3rds the size of the sample basket. Next time I will know, but once you start down that road there is no turning back unless you want a crazy hour-glass shaped basket. All in all I was happy with the way the basket turned out and it is currently displayed on my mantle. 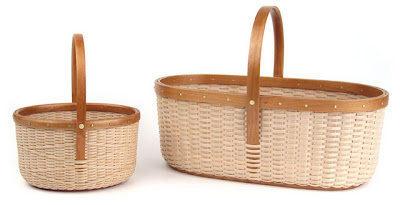 Cottage Cruet and Cottage Mail
The other two baskets that I finished from the retreat were two kits from Eric Taylor. These baskets are woven of hand pounded black ash with cherry handles and rims. Eric's baskets are a hybrid between Nantucket and Shaker baskets giving them a contemporary feel. These are both duplicate baskets for me so I will have to decide if I will sell them or save them for gifts.

So, three baskets completed on my own in a months time is really great. Of course I still have the other two Nantucket basket bodies I wove at convention to complete plus I have the three baskets from last years retreat to finish! Too many baskets and not enough time. I guess it could be worse...
Posted by J. Anthony Stubblefield at 9:48 PM No comments: