Earlier I wrote about a white oak basket I had in my collection from the Westfall family of  Missouri. Here are some others by the same family.

You can tell that the above baskets are made by the third to present generation of the family by a simple signature feature. Below is the feature to tell the difference.

I used to teach a lot of classes back in the the late 90s and early 2000s. The classes were hosted by weavers who had home studios where they taught classes most days of the week. Well, needless to say, at that pace anyone would burn out and that is what happened, first one, then the other closed their businesses. So without a place to teach I decided to take a little break. Then a bought a house and was busy with that, so had another excuse and then before I knew it 10 years had passed.

So, for old times' sake here are few of the baskets I used to teach. These photos were from 2000-2001 when my first digital camera was a whopping 4 megapixels (though cost over $700).

So I decided my front door needed an upgrade. I had gotten this brass Nantucket basket door knocker at the silent auction at the Missouri Basketweavers Guild convention last August, but wasn't sure how I was going to mount it to the door. I finally got a round wooden plaque from Michael's, painted it a nice avocado green, sealed it for outdoors, and mounted the knocker to it.

During one of my visits to etsy.com I was searching for turk's head knots and I ran across a store selling instructions and finished doormats, door stops, place card holders, etc. all knotted out of various ropes. I became fascinated with the monkey fist door stops. It took a couple tries, but I finally got one made. It actually works really well and hangs on the inside knob when not in use.

Both items give my front door a nice nautical themed upgrade.
Posted by J. Anthony Stubblefield at 9:22 PM 2 comments:

Email ThisBlogThis!Share to TwitterShare to FacebookShare to Pinterest
Labels: Crafts 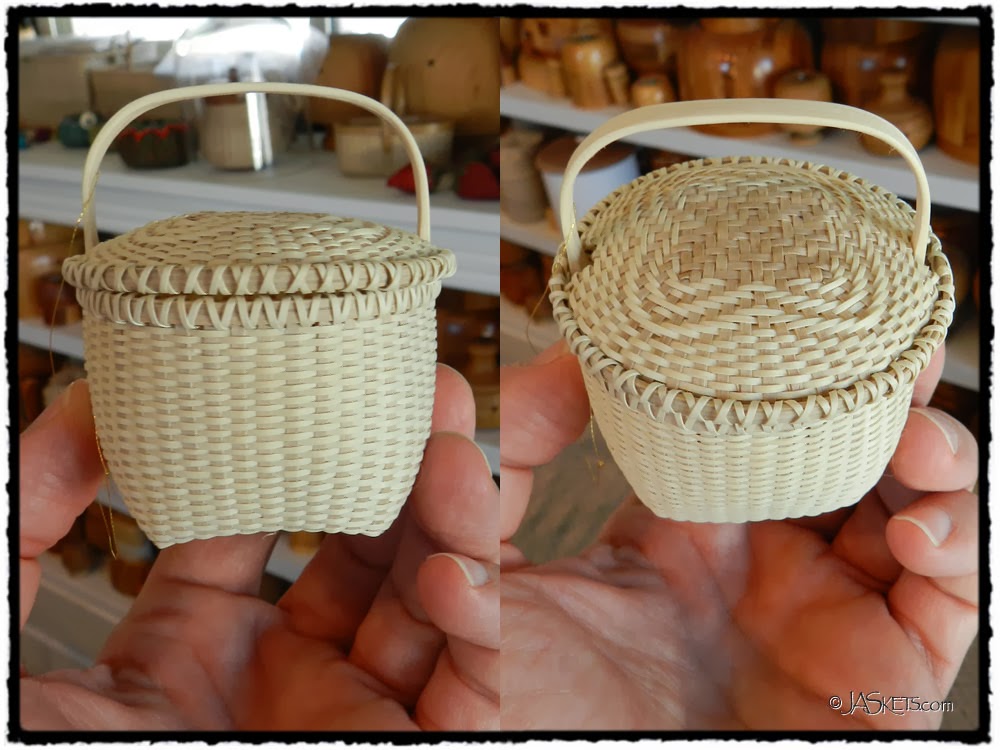 I present Alice Ogden's 2013 Christmas ornament basket. It is currently hanging with the rest of my mini baskets on my basket tree, but beforehand I had to admire it up close for a bit. This lovely black ash cathead basket features a captured quadrafoil lid. Alice used light sap wood and darker heart wood to enhance the clover-leaf pattern.
Posted by J. Anthony Stubblefield at 7:43 PM No comments:

Here in Missouri we joke that if you don't like the weather just wait a few minutes and for the most part that is pretty true. Everyone has a fit about the snow removal system we have in St. Louis, but the reality is that it usually melts in a day or so. So it isn't really necessary or make sense for the city to invest tons of money in snow removal equipment. Well of course that comes to bite us in the behind every few years. Just this past Sunday we got about a foot of snow and boy did it come down hard and heavy there for most of the day. It was really pretty and all the schools and many of the businesses closed for Monday. The university even closed, so I got a nice free vacation day. Of course, other than shoveling the walk I didn't even get out of the house for two days. 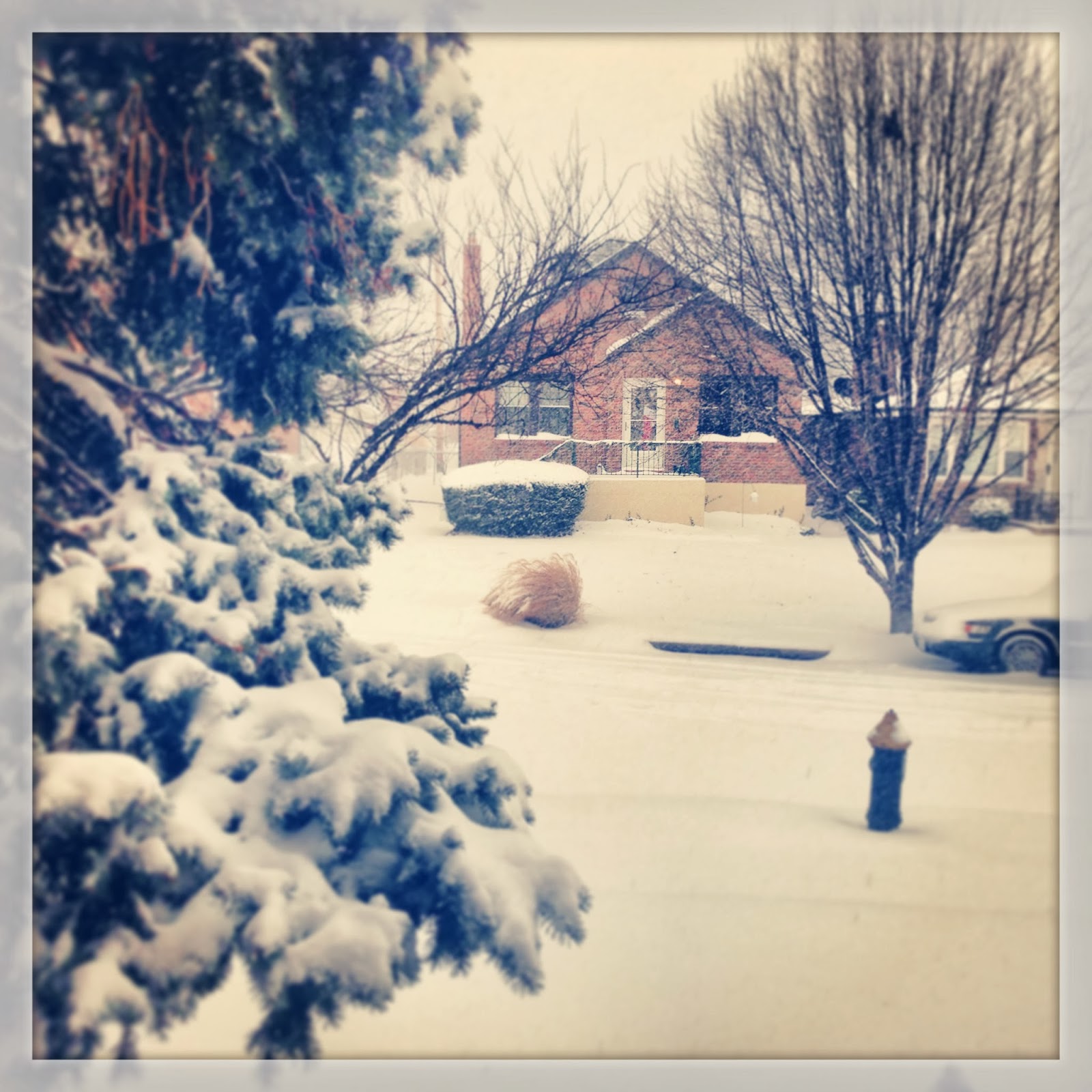 With all of that free time I didn't put away Christmas decorations or clean the house. No, I did what any respectable craftsman does, I started a new project! The one upside though of not being tempted to leave the house was that I actually finished my project.

I received a cute craft book, Little Birds, for Christmas. It included 26 projects made of felt, fabric and buttons. I was just looking for an excuse to try one of the projects. 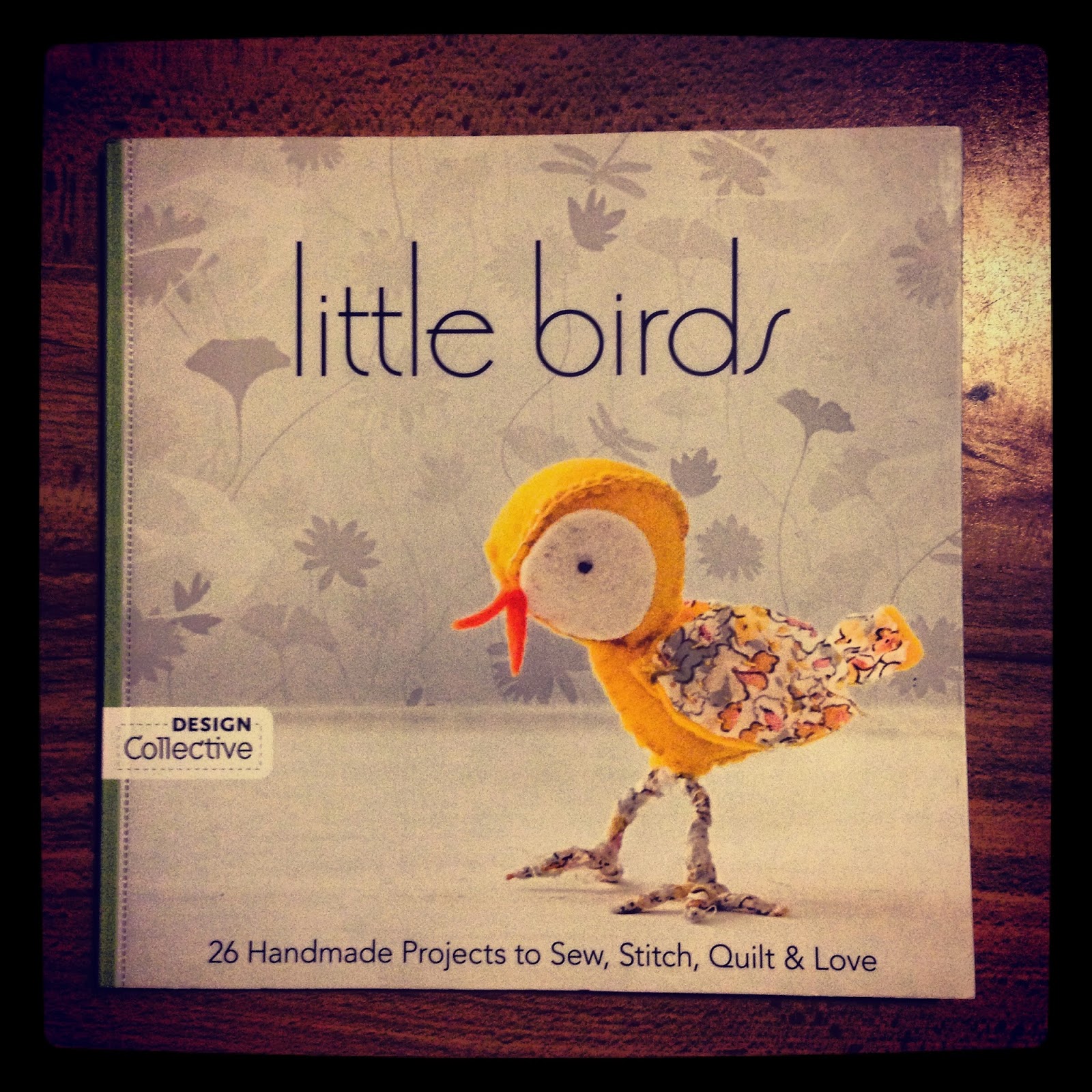 So after a few hours (well a few might be an underestimation) of uninterrupted stitching I had my little birdie complete. 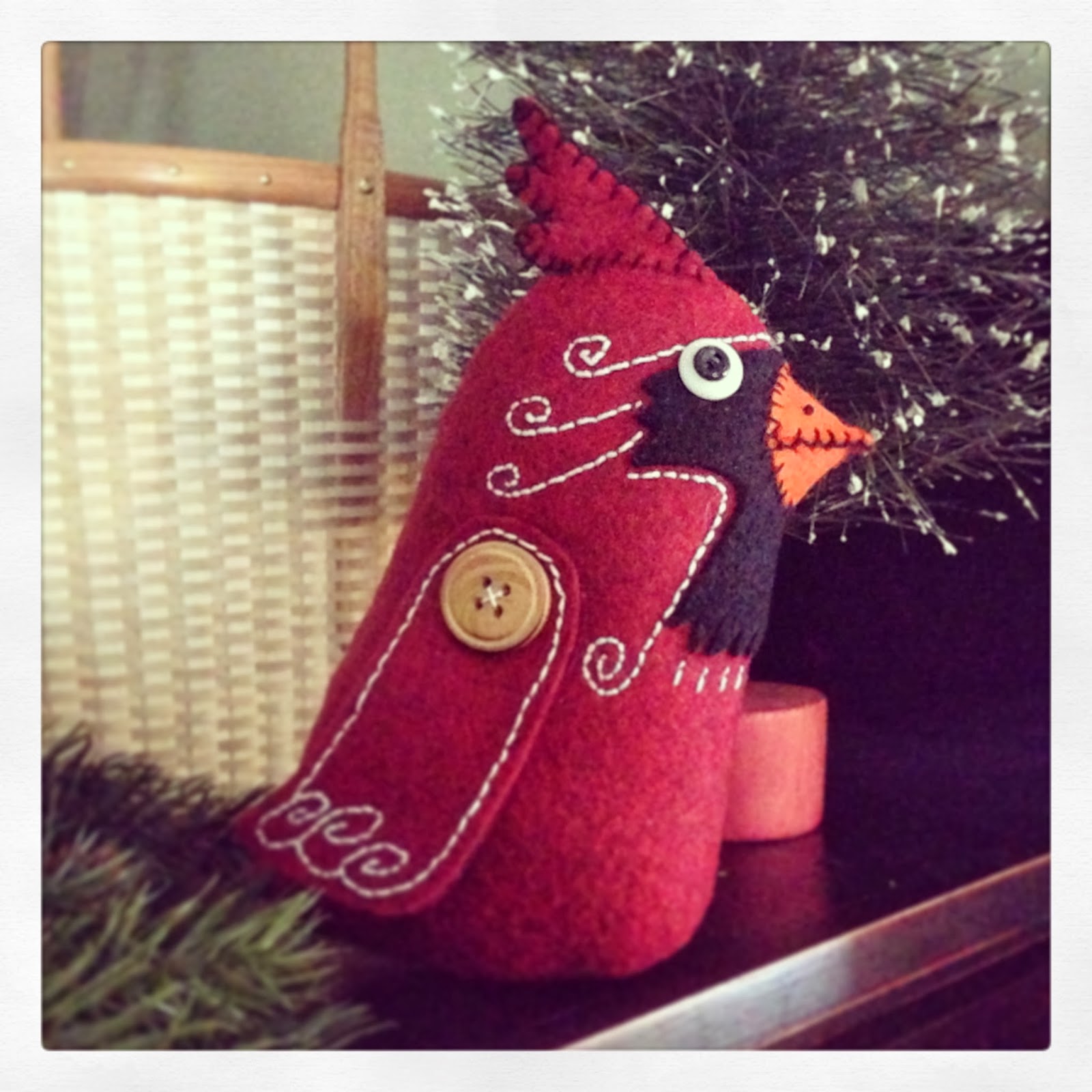 Of course I had to modify the pattern. You were supposed to enlarge it 200%, but that would have made a cardinal about 10" tall. I thought that was too large, so I only enlarged it 150%. While this made for a "cuter" size, it did mean that some of my pieces were a bit small to handle. It all worked out in the end though and I am itching to make an even smaller version or baby brother. 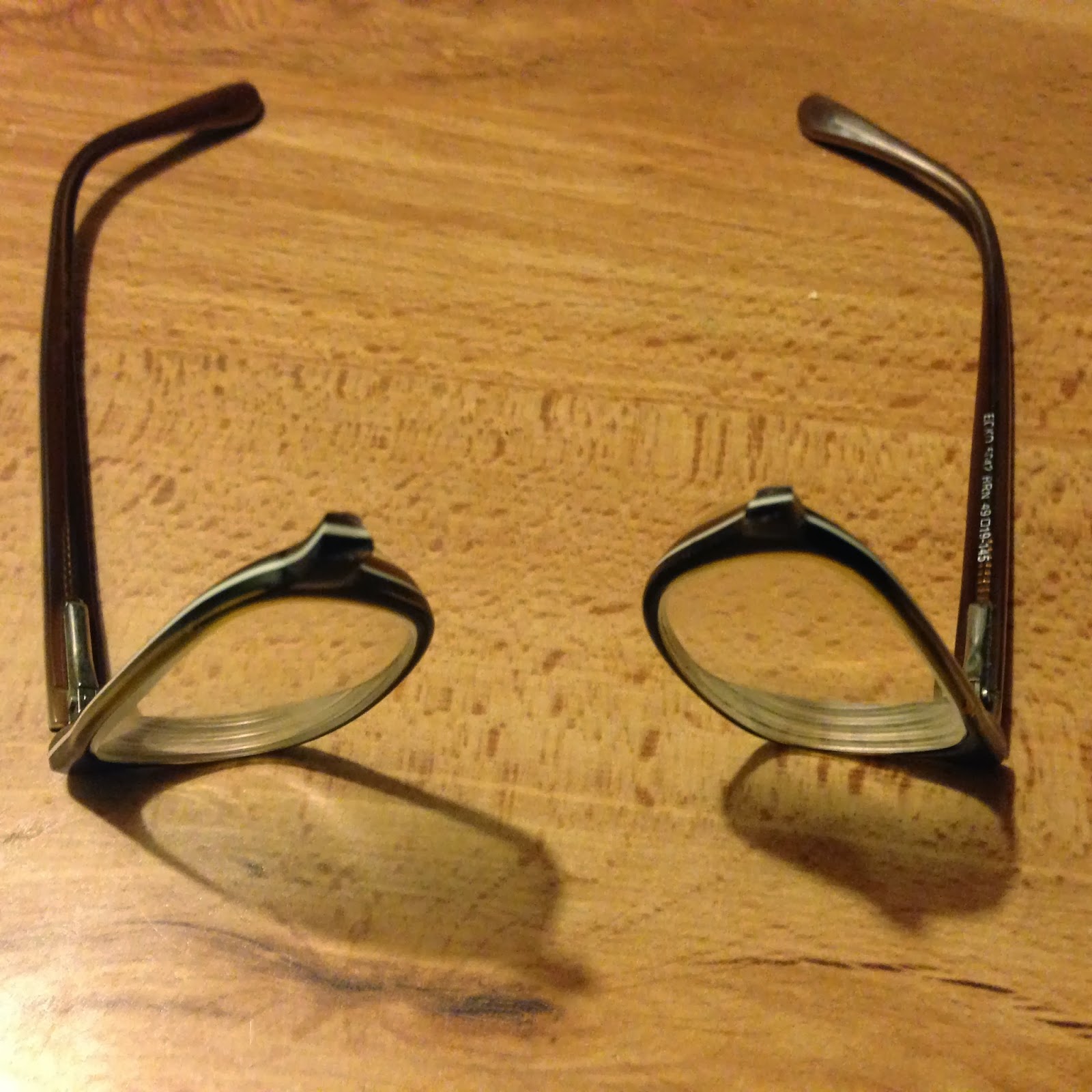 There was one casualty of the snow storm. My glasses kept fogging up, so I put them in my pocket since I really didn't need to see anything other than the path right below my feet. When I got back in the house after shoveling and began to un-bundle I discovered I have a couple things in my pocket. I couldn't figure out what else was in there beside my glasses when I discovered that the objects were the two halves of my prescription glasses. Oh well, I still have my contacts and I probably really need to get bifocal lenses anyway.

Well after 5 days the snow hasn't melted and we even got a couple inches more this morning. The main roads are finally clear, but the secondary streets, like mine are still a horrible mess. It is supposed to be in the 40s for the next few days and rain, so hopefully the streets will clear. The big piles everywhere are going to take awhile to melt though.
Posted by J. Anthony Stubblefield at 7:54 PM 4 comments:

Happy New Year to all of my blog readers. I hope everyone had a wonderful 2013 and even better 2014. I know for me 2013 had a lot of changes and I look forward to a peaceful and prosperous new year. During my nice long holiday break I made a couple new cards with motivational messages. 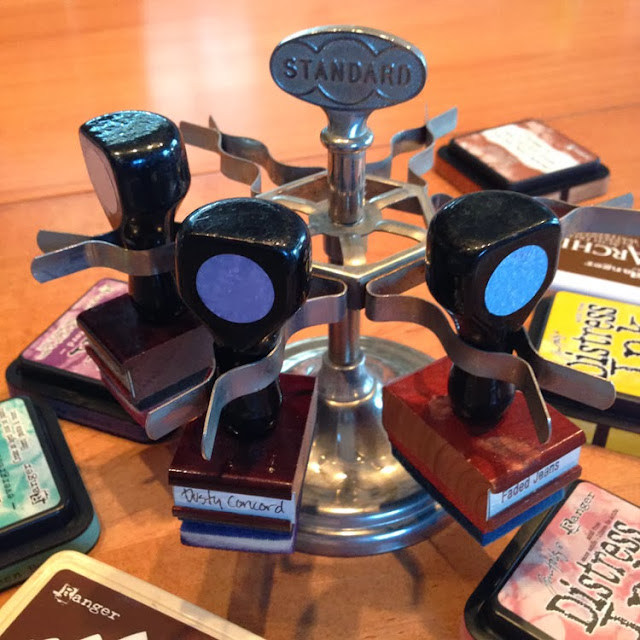 As many of you know, my dad is an antique dealer and all around junk collector. Just tell him something you are looking for and he is going to find if for you. I had him looking for a vintage rubber stamp spinner and of course he found me the great one in the photo above. It is perfect to hold the blending tools I am using on whatever is my current project. 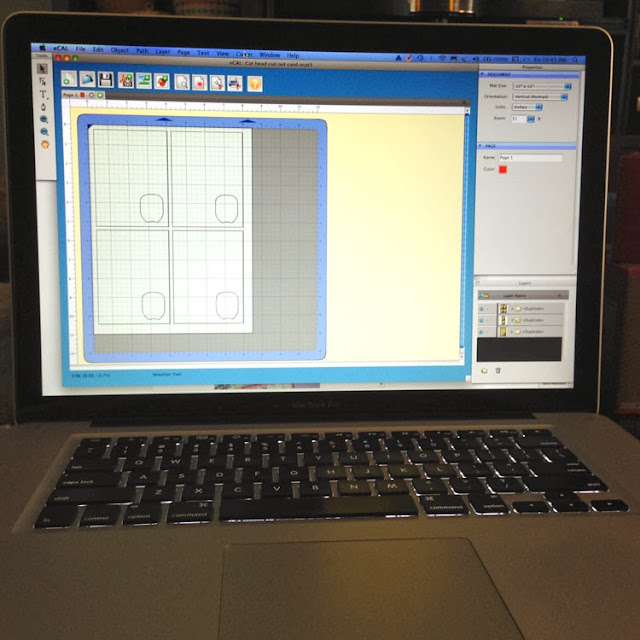 To create my new cards I used Adobe Illustrator to draw the shape of my mini Shaker cathead basket stamp and to place it in the lower corner of my card. After saving the Illustrator file in .SVG format I imported it into the eCal software that came with my Sizzix eClips cutting machine. The eCal software is great as you can easily duplicate and arrange your shapes to make the best use of your card stock. 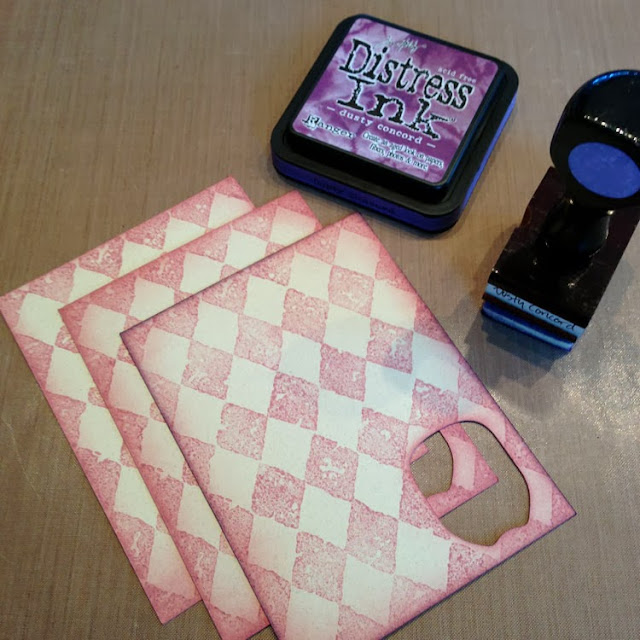 After cutting out my card fronts, I stamped them with an old Stampin' Up! background stamp using Victorian Velvet Distress Ink and edged them with the same color. To add a little dimension to the panels I darkened just the very edge with Dusty Concord. 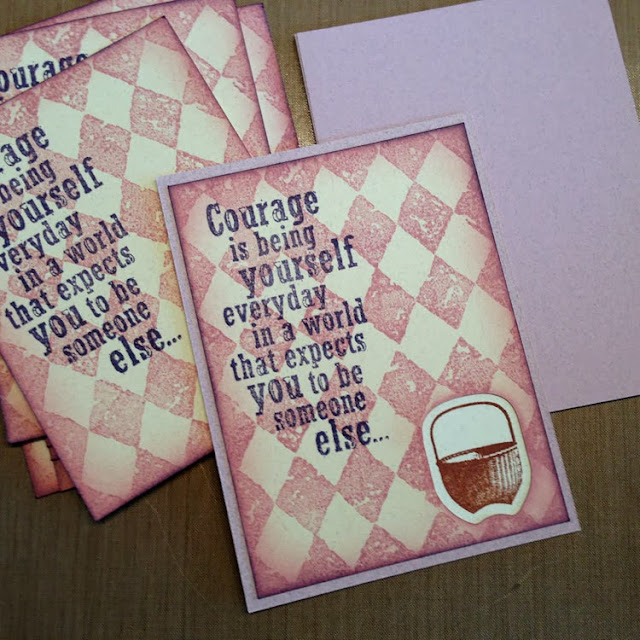 I stamped my Tim Holtz saying, "Courage is being yourself everyday in a world that expects you to be someone else," in Dusty Concord, layered my basket image (Coffee Archival Ink) in the cutout window and then framed the whole thing with a larger rose colored panel. 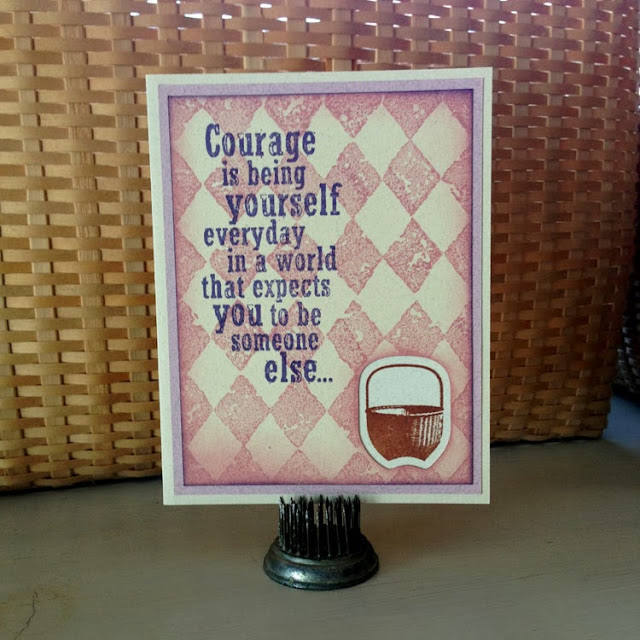 To finish the card, I affixed the assembled panel to a cream colored folder. 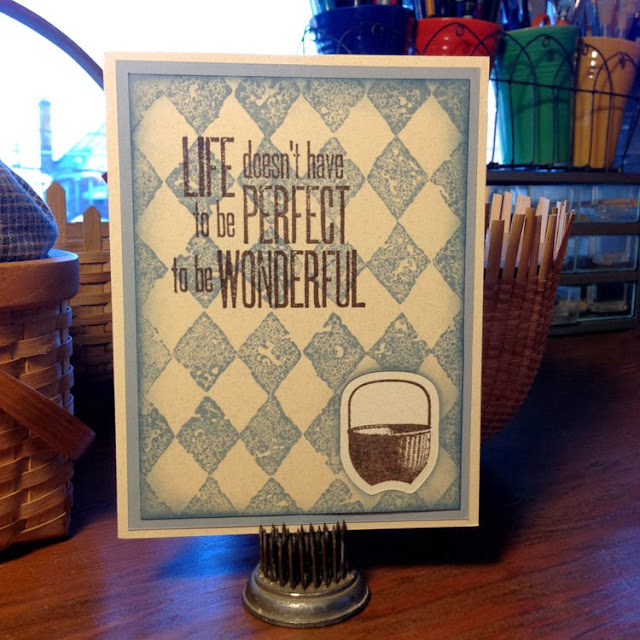 I also made a second version in a different color scheme, Distress Inks Weathered Wood and Faded Demin, and Espresso Adirondack Ink, with the Tim Holtz saying, "Life doesn't have to be perfect to be wonderful."

Well, I hope these two inspirations help steer the course for the year.

Posted by J. Anthony Stubblefield at 6:00 AM No comments: