I love glass domes. They just seem to make anything you put under them look special. I have ones in all different sizes that I have picked up over the years. Usually the ones you find are round and probably had a clock under them at one time, but on the rare occasion you can find an oval, those are usually the old ones. Most of the domes I have are without a base. While that isn't necessary to use them, it does look nice and it makes it much easier to move them and the object inside. Now that I have my new wood lathe I have all the best intentions in the world to turn some myself. So far that hasn't happened, but I still have that on my "to-do" list. Another benefit of the glass domes is that they protect your objects from dust. Since my knotted baskets, like the ones in the photo, are made of waxed linen they do attract dust (an curious kitties) more than a splint basket which can just be dusted off. I need to find a really tall one for the last knotted basket I finished, though they seem to get exponentially more expensive as the size increases. I will keep looking though.
Posted by J. Anthony Stubblefield at 1:44 PM 3 comments:

Email ThisBlogThis!Share to TwitterShare to FacebookShare to Pinterest
Labels: Collection, Tips and Tricks

I am so excited by the basket weaving classes I have lined up for this year in St. Louis. I need to finalize a few last details and I will be able to make the official announcements. Sorry to tease, but just hold July 28-31, 2012 for a great Eric Taylor workshop and October 18-21, 2012 for an equally great JoAnn Kelly Catsos workshop. Yes, that is eight days of basket weaving fun in 2012!

Watch for details to follow!
Posted by J. Anthony Stubblefield at 11:25 PM 5 comments: 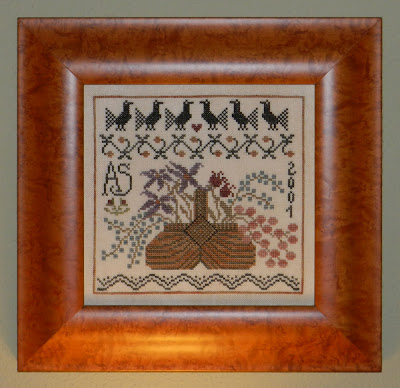 I was just admiring this cross-stitch picture my Mom made for me one Christmas when I realized that it was already over 10 years old! How in the world did that happen? I love all the different pictures my Mom has made for me over the years. Many Christmases have seen my Mom make me a picture, my Dad make me a piece of furniture and me make them a basket (my Dad always claims them, so I now just put his name on them).

I love vintage looking samplers, so this one with a basket was a special treat. So many times non-basket making artists don't do a very good job of painting/drawing/charting a basket, but this one did a pretty good job of recreating the look of a ribbed egg basket. The use of hand-dyed floss helps with the impression of weaving I think. This one hangs in my bedroom right next to my bed. I will try to take some more photos of some of the other cross-stitch pictures she and one of my childhood friends have made me.
Posted by J. Anthony Stubblefield at 6:43 PM 2 comments: 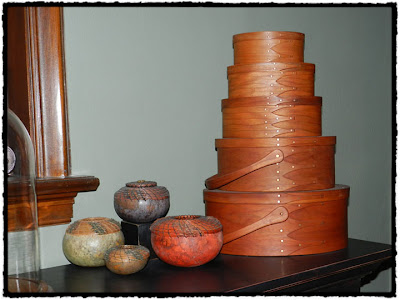 A stack of cherry Shaker boxes from a variety of makers that I have collected over the years. A grouping of gourd weavings by Ruth Andre. Ruth is now doing incredible paintings instead of these incredible baskets. I am glad that I got these four when I did. I just wish I now I would have gotten one of her larger pieces.
Posted by J. Anthony Stubblefield at 10:31 PM 1 comment:

Email ThisBlogThis!Share to TwitterShare to FacebookShare to Pinterest
Labels: Collection

So, I finally decided to make a new lighting setup for taking my basket photos. The old system I had built worked great, but it was really big and cumbersome. When it was setup it was great to use, but when it had to be taken down and stored I never wanted to get it back out again just to shoot a quick photo. So, as they say, necessity is the mother of invention so I scoured the internet and found a couple different tabletop setups that I liked. I would have loved to have bought a set of  Lowel Ego lights, but at about $300 for a set of two, that was more than I wanted to spend. So, off I went to Home Depot with a shopping list and a rough plan in my head. 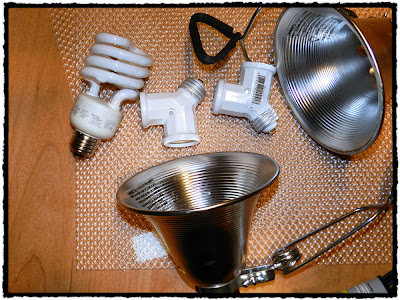 Stuff I had around the house:
Tools: 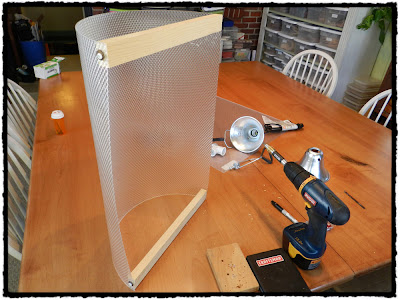 I started out by cutting two scrap pieces of wood 14" long. I pre-drilled holes, large than my sheet metal screws, in the corners of my florescent light covers and drilled matching smaller holes in the ends of my wood stretchers. I attached the stretchers to the plastic covers (prism side down) using screws and washers (to help the plastic not crack). The plastic was fairly flexible so the gentle curve was not hard to achieve. 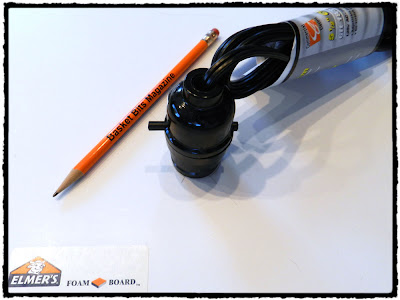 I removed the reflectors and clamps off the lights as all I wanted was the socket, switch and cord. I measured a backing piece of foamboard (14"x21.5"), found the center and traced the outline of the light socket. I then carefully cut out a hole for the socked to slip into (cut right on the line or a bit inside so that the end of the socket fits snugly). 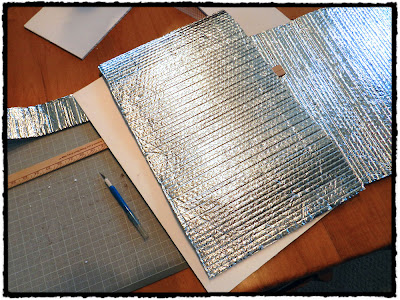 Being the pack rat that I am I had some shiny bubble wrap/insulation cubbied away from a delivery of frozen food. I cut this to match the foamboard backing and cut a hole in it as well for the light socket. I added this to help reflect forward as much light as possible. The plain white foamboard probably would have been fine, but since I had the silver stuff I figured I might as well put it to use.

I used short dry wall screws to attach the layer of bubble wrap and foamboard to the back of my diffuser. The light socket fit in snuggly without the need to secure it. With the Y-connector and light bulbs installed it can't come out anyway. There was a bow in the plastic along the sides that I was afraid would put pressure on the four corner screws. 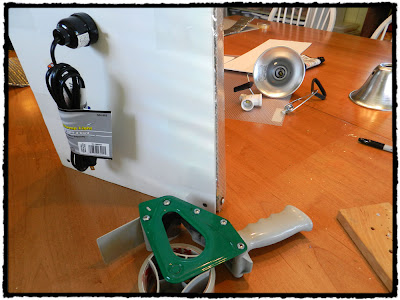 To relieve the pressure on the corners I eliminated the bow by using clear packing tape to squeeze the sides in against the foamboard backing. 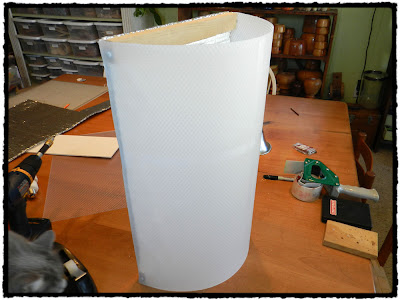 I then taped a layer of vellum to the outside of the plastic diffuser to soften the light. I didn't have a sheet large enough to cover the entire surface so I butted up four pieces and taped them together with scotch tape. Fortunately there was plenty of static electricity in the plastic cover so the vellum stuck down smoothly making it easy to tape.

To finish the light I installed the socket, Y-connector and two compact florescent bulbs. I then repeated the whole process to make my second light. 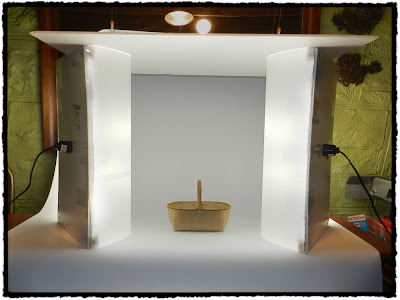 I use a large piece of white paper as a backdrop, but color would work. Since this is setup in my basement I have two clips suspended from the ceiling so that I can clip the top edge of the backdrop. The key is to have a smooth continuous background without any angles or seams and to have enough backdrop that it is away from your work. Fabric can work, but I prefer all the wrinkles and drapes be smoothed away as to not distract from the basket or object you are photographing. I also balanced a large piece of white foamboard across the top to reflect some of the light down. Since I am using compact florescent lights there really isn't an issue with heat like there in with standard incandescent bulbs.

While I had the room lights on to take this photo of the whole setup, I normally photography my work in a darkened room to eliminate any stray light or shadows. 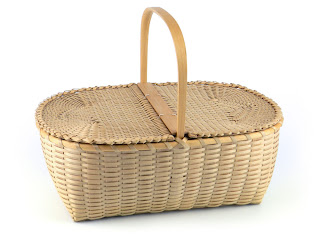 Here is the resulting photo from my new setup. The lighting is nice and balance and the shadows are soft. Of course you can play around with positioning the lights and/or objects to change the lighting, and you can even try just turning on one of the lights, but you might need a piece of white board or some kind of reflector to bounce some light back onto the object.