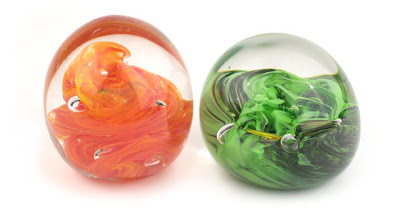 Well I haven't done much (who am I kidding, any) basket weaving lately, but I have still been keeping my crafting skill in practice with other projects. One of the classes I recently took with a couple of friends was a class in making glass paperweights at a local shop, Third Degree Glass Factory. This was just an afternoon class, from 2 to 5pm on a Saturday so it was pretty fast and furious. We did learn a lot, but with only having time to make two paperweights you were just getting the hang of it when it was time to quit. I would love to take another class and if they only had 12 students like they initially said then we would have had time to make three paperweights each.

I was surprised at how much of a team effort the project would be. It really took three people to make each paperweight. The person actually "making" the paperweight pretty much stayed seated while an assistant heated up the glass and helped rotate it while the maker worked it with the various tools. A third person's job was to hold a long wooden paddle under your arm and hand so you wouldn't get burnt from the heat coming off the glass. The first one was kind frightening as you didn't really know what to expect and how the glass was going to behave. Of course the three instructors made everything look so easy. But by the second demonstration and the second paperweight we were feeling so much more confident.

The orange paperweight above on the left is my second one and the one I am much happier with. Both are more lopsided than I expected. Some how I completely didn't notice that when they were being finished up, but the one friend I have spoken too that took the class also commented at how lopsided his were too. I guess it is sort of like pot throwing, once you get past a certain point the shape is set and the only way to change it is to basically start over again. If I take another class I would definitely know more of what to watch for and hopefully how to control it. Unfortunately the class was $95.00 so I will have to see if I get any Christmas money.

While this wasn't fiber related in the least it did get me motivated and excited about weaving again. Sometimes you need a little recharge to get the creative juices going again. It is also fun to do things that are completely outside of your comfort zone sometimes.
Posted by J. Anthony Stubblefield at 4:15 PM 2 comments:

I just read this over on Pam Zimmerman's blog, Catching the Moon: Weaving My Life. 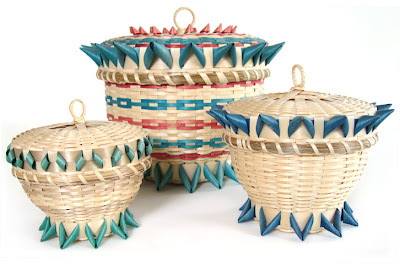 Three of the Native American baskets I have in my personal collection.

The indigenous peoples of North America -- the First Americans -- have woven rich and diverse threads into the tapestry of our Nation's heritage. Throughout their long history on this great land, they have faced moments of profound triumph and tragedy alike. During National Native American Heritage Month, we recognize their many accomplishments, contributions, and sacrifices, and we pay tribute to their participation in all aspects of American society.

This month, we celebrate the ancestry and time-honored traditions of American Indians and Alaska Natives in North America. They have guided our land stewardship policies, added immeasurably to our cultural heritage, and demonstrated courage in the face of adversity. From the American Revolution to combat missions in Iraq and Afghanistan, they have fought valiantly in defense of our Nation as dedicated servicemen and women. Their native languages have also played a pivotal role on the battlefield. During World Wars I and II, Native American code talkers developed unbreakable codes to communicate military messages that saved countless lives. Native Americans have distinguished themselves as inventors, entrepreneurs, spiritual leaders, and scholars. Our debt to our First Americans is immense, as is our responsibility to ensure their fair, equal treatment and honor the commitments we made to their forebears.

The Native American community today faces huge challenges that have been ignored by our Government for too long. To help address this disparity, the American Recovery and Reinvestment Act allocates more than $3 billion to help these communities deal with their most pressing needs. In the Fiscal Year 2010 budget, my Administration has proposed over $17 billion for programs carried out by the Bureau of Indian Affairs, Indian Health Service, and other Federal agencies that have a critical role to play in improving the lives of Native Americans. These programs will increase educational opportunities, address the scourge of alcohol abuse and domestic violence, promote economic development, and provide access to comprehensive, accessible, and affordable health care. While funding increases do not make up for past deficiencies, they do reflect our determination to honor tribal sovereignty and ensure continued progress on reservations across America.

As we seek to build on and strengthen our nation-to-nation relationship, my Administration is committed to ensuring tribal communities have a meaningful voice in our national policy debates as we confront the challenges facing all Americans. We will continue this constructive dialogue at the White House Tribal Nations Conference held in Washington, D.C., this month. Native American voices have echoed through the mountains, valleys, and plains of our country for thousands of years, and it is now our time to listen.

NOW, THEREFORE, I, BARACK OBAMA, President of the United States of America, by virtue of the authority vested in me by the Constitution and the laws of the United States, do hereby proclaim November 2009 as National Native American Heritage Month. I call upon all Americans to commemorate this month with appropriate programs and activities, and to celebrate November 27, 2009, as Native American Heritage Day.

IN WITNESS WHEREOF, I have hereunto set my hand this thirtieth day of October, in the year of our Lord two thousand nine, and of the Independence of the United States of America the two hundred and thirty-fourth.

Posted by J. Anthony Stubblefield at 10:01 AM No comments: 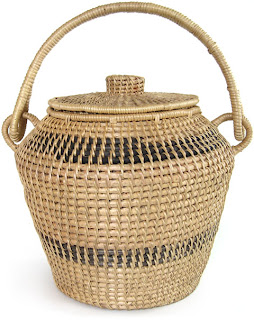 11" dia. x 11" h w/o handle
This beautiful coiled basket was a gift from my aunt and uncle a few Christmases ago. A coworker of my aunt was going to Africa so she asked her if she would look for a basket for her nephew. The poor woman had to drag the basket all over her vacation, but according to my aunt she took it as a quest and had fun looking for and acquiring the basket. Somewhere I have a photo of her with the basket on safari. I thought it was inside the basket, but it isn't so I will have to track it down.
Here is what the note inside the basket said:

Makenge basket, hand-woven from the roots of the Makenge tree by the women of the Upper Zambezi River region of Zambia. Makenge baskets take about a week each to make and are used to harvest, winnow and store grain. A newlywed bride may be given several baskets by her in-laws, which she will eventually pass down to her children. Makenge baskets are very strong and durable which, if required, can be washed or scrubbed with no ill effect. Colors are obtained by boiling the roots in various barks.

The basket is definitely sturdy and well made. The lid fits on like Tupperware. As with all of my collection the only "use" the basket sees is as an art object. I don't intend to scrub the basket any time soon.
Posted by J. Anthony Stubblefield at 7:48 PM 3 comments: